Posted at 18:20h in History of Wine by Ana Saldaña

In the first part of this post we discussed the origins of wine, where the first winery to date is dated, how wine was transported from one country to another and we could get a good idea of the importance of this beverage, already placing us in the year 4,000 BC.

Today I want to continue this story by commenting on the importance of wine in the classical world, focusing on the very interesting Greece and the Roman Empire.

The Greco-Roman legacy is the basis on which the West developed its ways of thinking and organizing political and social life, as well as language, art, political thought, law, philosophy, science, religion and theater. Greeks and Romans formed 2 spatially and temporally distinct cultures, which coexisted at a moment in history.

In addition, a culture in itself was created around wine that lasts to this day and it is for this reason that I would like to explain this fantastic legacy as well as possible. Will you join me?

HOW DID THE CULTIVATION AND CONSUMPTION OF WINE SPREAD?

The vine, which originally came from Caucasian regions such as Armenia, Georgia, the Zagros Mountains, etc., gradually spread throughout the Mediterranean until it was cultivated in Egypt, Mesopotamia, Phoenicia and Mycenae.

As different trade routes were established in the Mediterranean, both the consumption of wine and the cultivation of vines itself spread even further from regions of the Black Sea to the Iberian Peninsula, passing through North Africa.

At that time, viticulture was particularly successful in the area known as Gaul and Hispania, and after the 1st century AD, Italy became the largest wine producer in the Mediterranean.

THE GROWTH OF VINES

The Greek civilization in particular, was passionate about wine and its consumption and the demand for this delicacy was always high.

The Greeks themselves knew the three essential elements to obtain a good wine: the soil, the climate and the grape variety and in this way they would combine the different varieties to obtain new types of grapes as well as new flavors.

However, it was the Romans who left us the best descriptions of the winemaking processes. For example, the Greeks diluted the wine with water, but the Macedonians, scandalized by this process, decided to drink the wine in a clean and natural way, without any kind of mixture.

As we can see, in the end each culture polished in one way or another, the way they consumed it.

Some places (especially some Greek islands) quickly gained notoriety and prestige as great wine producers, such as Chios, Lesbos, Rhodes or Thasos. 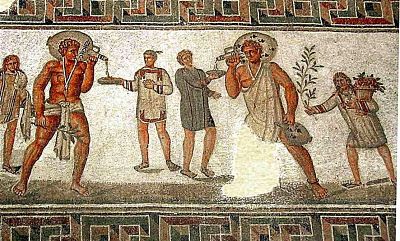 Also, in Italy we find vineyards with a high reputation in areas such as Campania or the Northeast of Italy.

The grapes were harvested and then pressed with the feet, placing the result in vessels, baskets or stone jars, although little by little the pressing processes were polished and improved.

Many of the vineyards located in the Greek islands added sea water to the pressed must to make the wine softer and increase its acidity.

On the other hand, they obtained both white and red wine. In the case of red wine, they used two different methods to enhance its color; on the one hand (and before crushing the grapes in their entirety) they left the mixture resulting from the pressing for a few hours so that it would achieve more reddish tones. The other way they used was aging it for a few years and even exposing the wine to heat, storing it in the upper parts of the houses.

As we can see, and with the tools they had at their disposal at that time, both the Greeks and the Romans were already trying to experiment and get the best out of the wines they cultivated.

After these processes, the wine was fermented and stored in large terracotta vessels, usually partially fixed to the ground and located in open-roofed buildings with walls that included openings to allow fresh air to enter.

When ready, the wine was then drained and stored in clay amphorae for transport and usually sealed with a stopper of the same clay or resin. Amphorae destined for export were sealed to indicate their origin.

DRINKING WINE: THE IMPORTANCE IT TOOK ON IN SOCIETY

Wine was relatively cheap and normal in daily consumption, both in classical Greece and in Roman culture.

It was drunk on its own and to accompany meals. As I mentioned before, the Greeks, for example, diluted it with water (1 part wine to 3 parts water) to prevent excessive alcoholism, which was (at least by the elite) considered a trait of foreign “barbarian” cultures and was parodied in Greek comedy plays. Drunkenness also appears in many Greek myths as an explanation for uncivilized behavior.

In addition, this drink was drunk at social events such as Greek symposium and parties where men of the most elite society debated politics and philosophy while musicians entertained their evening.

They had developed vessels, which men could easily lift from the floor and drink while reclining on a couch. In addition, there were also other vessels called “kraters” where wine could be easily mixed with the water mentioned in the previous point.

If we look at the Romans, their equivalent of the symposium would be the convivium; on this occasion women with more notoriety were also invited to these conviviums and in turn, the food began to have more relevance. Wine was also used on some occasions (and always in moderation) as medicine and also as a libation to the gods in religious ceremonies.

After all, wine was a gift from the gods but always to be drunk in moderation if one did not want to end up with them sooner than expected.

And here ends our journey through Greece and Rome, knowing a little more about their culture and especially how they treated it, how they obtained it, how they consumed it and its importance in Greco-Roman societies, undoubtedly a very important legacy that still remains with us today.